State Line pizza is a locally owned and operated family pizzeria that has been in business in northwest Indiana since 1957. Currently the fourth generation of the Ambos family is working in the restaurant business.

John Ambos was the first generation who started his tavern business in 1914, on the corner of Clinton and Hohman in downtown Hammond. Because of prohibition John was forced to close his tavern in 1920. Years later, his son Gene Ambos designed and operated the 20th Century Lounge on State St. in downtown Hammond. The 20th Century was a tavern, restaurant, and a 24 lane bowling alley. It was a popular bowling alley and bar with many of the regions factories, businesses, and working class men and women. The 20th Century was opened after WWII and closed in 1962. In 1964 Gene purchased State Line Pizza at 9515 State Line Rd., which was opened in 1957. Gene and his son Mark worked at the Hammond location until 1972. Beginning in 1972 Mark and his wife Marilyn took over operation of the Hammond store, and at the same time taught school in Hammond. Marilyn taught for 5 years and Mark continued to teach for 19 years while also operating the restaurants.

During the 70's 80's and 90's Gene and his brother George continued to help at the restaurant, as well as Marilyn's parents Joe and Tess. They all played a big role in making State Line Pizza the success it is today.

Mark and Marilyn now have their two daughters, and son-in-law, who are the fourth generation in the restaurant business. 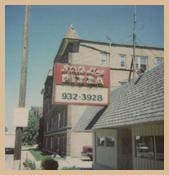 They expanded in 1983 and opened the Dyer store, and in 1996 moved to its present location. The Highland store started in 1988, and moved to its present location in 1993. The Schererville location was opened in 1989, and a dining room was added in 2001. The Munster location was added in 2001 and closed in 2014. We are fortunate to have many employees who have been with us for decades, their dedication and loyalty are integral to State Line's success.

State Line Pizza started selling pizza almost 60 years ago. In the beginning a simple menu included just thin crust pizza and pop. Even though there is a much larger menu, many things remain the same. We still make our own dough and sauce and grate our own blend of mozzarella. Our pizza sausage comes from the same Italian family that supplied it in the beginning. They also make our Italian beef & link sausage. Our other distributor is a second generation local family business that has supplied us for decades also.

State Line Pizza truly is a family restaurant, and we know our customers are like family too, and that's why we strive to make the best product possible.